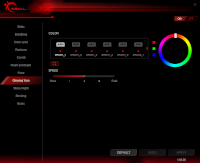 I recently updated my Gigabyte AX370-Gaming 5 to the latest BIOS Version F10. My G.Skill Trident Z DRAM Modules F4-3200C14-8GTZR always worked like a charm on this board, well except the first versions. With the F10 BIOS still Frequency speed @ 3200 so everything fine.

Anyhow, when looking into my case I found out that the LEDs of my G.Skills were OFF. Tried a lot of stuff and found that you simply need to power off your computer and cut the power supply for a certain time so the caps will be unloaded as well. I made a coffee so came back around 2 minutes later. Afterwards I had the default rainbow effect again.

Nice, thought the new G.Skill v1.00.28 will work now, but nope: „No G.Skill Trident Z RGB DRAM module(s) found on your computer system“ error message showed up. Tried a lot of things but nothing could fix it (Deinstall, Reinstall all versions[v1.00.16, v1.00.22], reinstalled windows, deactivated the Logitech Gaming services, …).

What really was the issue that the TridentZ_RGB_v1.00.28.zip file is coming from an unknown source so Windows 10 will not unzip it properly (At least what my thoughts are here)? I would guess this guide will work for any other Hardware combinations as the problems seems to be the file handling in windows. So ASUS, MSI, ASRock,  and other  MB vendors should work as well.

I do not take any warranty so try it on your own risk.

Want to share my technical experience and fixes for known issues.